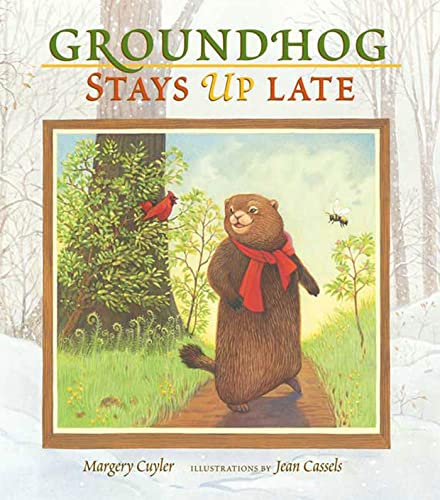 Convinced that he's been missing out on wintertime fun, Groundhog refuses to hibernate, even though his forest mates—Squirrel, Bear, Badger, Rabbit, Fox—warn that he'll be lonely, hungry and reneging on his unique responsibility. "How else will you wake up on February second and look at your shadow so we'll know when spring is coming?" reasons Badger. When their prediction proves right, Groundhog fools them into waking up and sharing their food hoards by convincing them that spring has come a month early. His friends get their revenge by painting a groundhog-shaped shadow on the ground ("It looked a little strange and it was a funny color, but it had to be his") so that the rodent retreats to his den and misses spring altogether (the final page, however, finds him ready to revel on New Year's Eve). Cuyler's ( ) restrained, unadorned storytelling bubbles with comic winks, and its leisurely pace will encourage even antsy youngsters to snuggle into her cozy prose rhythms. Cassels's ( ) handsome gouache paintings seem inspired by the stylized design aesthetic of vintage murals; even though many of her pictures occupy a half page or less, they possess a commanding sense of scale and drama. As for Groundhog, he's a terrific foil for all this visual elegance—a Falstaffian figure sporting a jaunty red scarf and with a nose for fun. Ages 3-7.