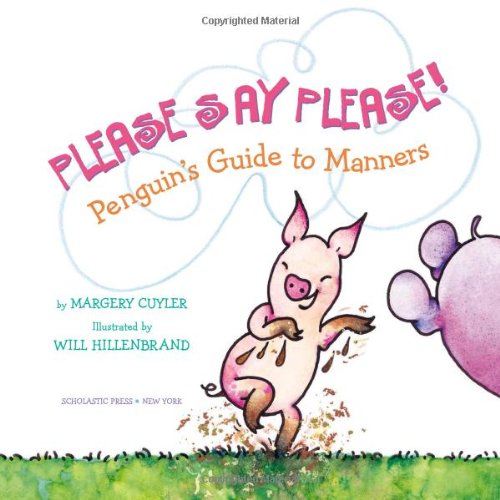 Penguin wants to be a gracious dinner host—he's even perfectly dressed for the part—but he has some of the most uncouth acquaintances in the entire animal world. Pig wipes his muddy hooves on the tablecloth (" "), Elephant sprays milk through his trunk (" ") and Giraffe engages in extreme burping (" "). "Is that right?" asks Cuyler (previously paired with Hillenbrand for ), after each faux pas (which include both individual and group gaffes). "No, that's wrong," she explains, and then rewinds the tape, so to speak, and shows what happens when some basic painless etiquette is applied to each situation. Giraffe, for example, can't totally suppress her burp, but she does manage to cover her mouth and minimize the volume, which prompts Penguin to clap his hands. Hillenbrand matches Cuyler's simple, crisp text by filling in his bold ink outlines with softly textured watercolors, streamlining the characters' distinguishing features and giving them a doodle-like spontaneity. By sticking with the same straight-on perspective of Penguin's long dining room table throughout the book, the illustrator stages a veritable smorgasbord of rotten manners. As in many such books, however, the good behavior wins the approval, but the bad behavior supplies the fun. Ages 3-up.