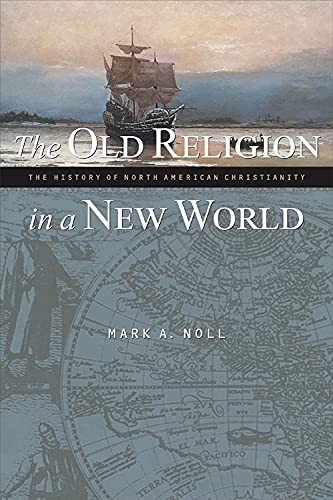 THE OLD RELIGION IN A NEW WORLD: The History of North American Christianity

Award-winning church historian Noll () offers a serviceable and workmanlike introduction to the history of Christianity in North America, primarily the United States. Like other books of this kind (e.g., Sydney Ahlstrom's ), Noll's traces the chronological development—from the colonial years up until the last year of the 20th century—of Christianity after it moved into North America. He provides sketches of events such as the First and Second Great Awakenings, the rise of denominationalism and the beginnings of the Pentecostal movement in the late 19th century. Noll contends that four elements—space, race and ethnicity, pluralism, and the absence of confessional conservatism—combined to distinguish North American Christianity from its European origins. Although his book focuses mainly on the United States, Noll offers a brief overview of the history of Christianity in Canada and Mexico. As he gazes into the future of American churches, he volunteers some already well-worn predictions: denominations will continue to erode because Christians will keep seeking community based on shared theological convictions; Pentecostalism will continue to move beyond its institutional setting to pervade a number of diverse Christian communities; the number of Roman Catholics will continue to rise. There are more detailed surveys of American Christianity available, but Noll offers an up-to-date history that explores the contemporary scene and provides some idea of how we got here.