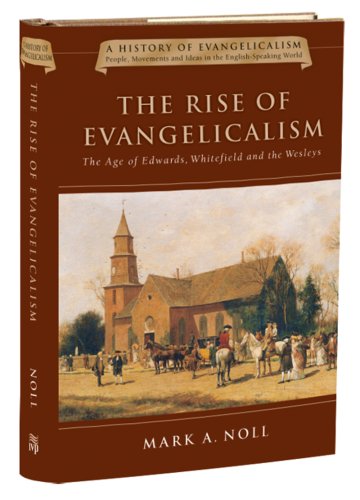 THE RISE OF EVANGELICALISM: The Age of Edwards, Whitefield and the Wesleys

In the inaugural volume of an anticipated five-volume history of evangelicalism, Noll, one of the deans of American church history, eloquently chronicles the development of evangelicalism in North America and Britain. Defining evangelicalism by four key ingredients (conversion, the Bible, missionary activity and the centrality of the cross in atonement for sin), Noll traces the contours of religious movements between 1730 and 1790 that he argues formed the core of the evangelical approach to Christianity. Paving the way for the revivals and religious reforms in the colonies, Noll points out, were the increasing dissatisfaction with the established church in England and the subsequent rise of reform movements such as Puritanism and Pietism. Primary among the leaders in colonial evangelicalism were Jonathan Edwards, George Whitefield and John Wesley, each of whom led people in life-changing revivals emphasizing conversion and atonement. The latter part of the 18th century witnessed the formation of a variety of religious groups—including Baptists and Methodists—flying the evangelical banner. Admirably, Noll incorporates materials on the roles of women and blacks in evangelicalism, pointing out that writers such as Hannah More and Olaudah Equiano, a former slave, offer compelling views on the relationship between gender and race and evangelical religion. Many will find it strange that Noll anachronistically baptizes Edwards as an evangelical when he saw himself as a Calvinist. Otherwise, Noll's fine study is marked by his usual graceful style and his peerless insights into American religious history.