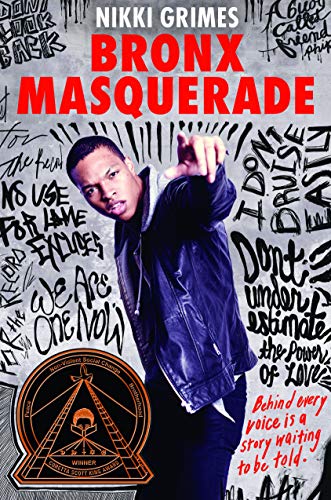 When a high school teacher in the Bronx begins to host open-mike poetry in his classroom on Fridays, his students find a forum to express their identity issues and forge unexpected connections with one another. Grimes's () creative, contemporary premise will hook teens, and the poems may even inspire readers to try a few of their own. The poetic forms range from lyrics penned by aspiring rapper Tyrone to the concrete poem of a budding Puerto Rican painter Raul (titled "Zorro" and formed as the letter "Z"). Ultimately, though, there may be too many characters for the audience to penetrate deeply. The students in Mr. Ward's English class experience everything from dyslexia and low self-esteem to teenage motherhood and physical abuse. The narrators trade off quickly, offering only a glimpse into their lives. Not even Tyrone, who breaks in after each student's poem to offer some commentary, comes fully to life. The students' poems, however, provide some lasting images (e.g., overweight Janelle, who is teased for her "thick casing," writes, "I am coconut,/ and the heart of me/ is sweeter/ than you know"). Any one of these students could likely dominate a novel of his or her own, they simply get too little time to hold the floor here. Ages 12-up.