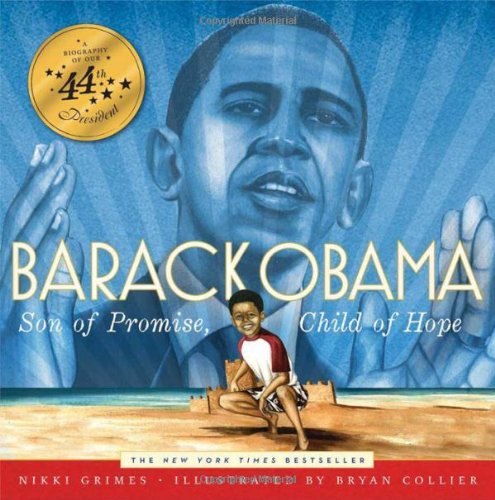 “One day Hope stopped by for a visit,” begins this biography, narrowly framed as an exchange between an African-American mother and her son. They sit together on a “frayed” sofa in a “tenement” as she tells him who “Braco-what?” is and why he is so special; at the end she blinks back tears when he tells her that he, too, wants to be president when he grows up. (Hope later talks to Barack Obama, as does God.) Grimes ( ) approaches her themes with a heavy hand, starting with her treatment of race as she describes “his mama, white as whipped cream,/ his daddy, black as ink” (she gets at awe similarly: “Barry’s mom married/ a man named Lolo/ and—Oh! The wonderland/ he took Barry to: Indonesia”). Collier uses watercolor and collage, a choice he explains as a metaphor for the way Obama has “piece[d] life’s issues together to create a courageous vision for the world.” There is much to find in each composition (artfully placed photo images, batik patterns, etc.), but the illustrations often feel static and a few (like the one in which a single tear streams momentously down Obama’s cheek), stagy. Ages 5–10.