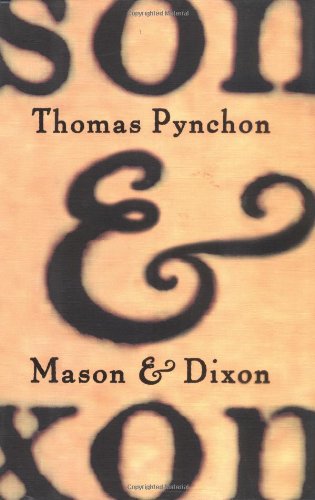 Reputedly two decades in the works, this masterful, polymathic saga begins in the stars and ends at home, in the aftermath of the Revolutionary War. Through the after-dinner reminiscences of a charming, self-appointed and unreliable Boswell, the Reverend Wicks Cherrycoke, Pynchon tells the story of the British astronomer/surveyor duo of Charles Mason and Jeremiah Dixon--from their first meeting in 1761 to Mason's death 25 years later. This tale, which leads to South Africa, to St. Helena's and ultimately over the Allegheny Mountains, brings the Mason and Dixon into contact with several major figures of American and astrophysics history (George Washington, Thomas Jefferson, Ben Franklin, the Royal Astronomers James Bradley and Nevil Maskelyne), along with a much larger cast of characters (human, animal and mechanical) previously consigned to oblivion, including the crazed feng shui expert Captain Zhang, Fang the Learned English Dog and an amorous, man-made talking duck. For all the verve of its dramatis personae, however, this is Pynchon's most restrained novel, and his most unabashedly literary. Echoes of Kipling, Kafka, Lawrence and Conrad resonate alongside Hawthorne, Melville, Twain and the post-Revolutionary poet Joel Barlow. Pynchon's customary wordplay is here (in spades); the novel's jokes rely less on the cartoonish slapstick of V. or Gravity's Rainbow, or the broad satire of The Crying of Lot 49 or Vineland, than on tricks of voice: Pynchon peppers Cherrycoke's 18th-century prose with heroic verse and bawdy serial novels, anachronistic popular songs (Tin-Pan Alley, folk, country-western) and equally anachronistic cultural references: ""Keep away from harmful Substances, in particular Coffee, Tobacco and Indian Hemp. If you must use the latter, do not inhale."" Even at their goofiest, these time-warped tidbits serve a clear purpose: they are omens of the disorientation, and the dispossession, ushered in by the heroes' famous trek West, when they surveyed the line that divided slave-owning Maryland from Quaker Pennsylvania and so laid a straight road into the country's future. In fact, every step of the journey is an omen--or an allegory--of our own American century considered in every aspect, from the culinary to the musical to the political, to the grandly epistemic, with the enlightened Dixon and the proto-Romantic Mason squabbling over their responsibilities to the wilderness before them and the shadowy European interests behind. In the British, French and Dutch naval empires Pynchon has at last discovered historical powers--historical legacies--worthy of his paranoia; in this novel he has found his way back to the great American tradition of history-writing--nine parts ghost story, one part fable--full of the grim faith that ""our Sentiments--how we dream'd of, and were mistaken in, each other, count for at least as much as our poor cold Chronologies."" (Apr.)
close
Details