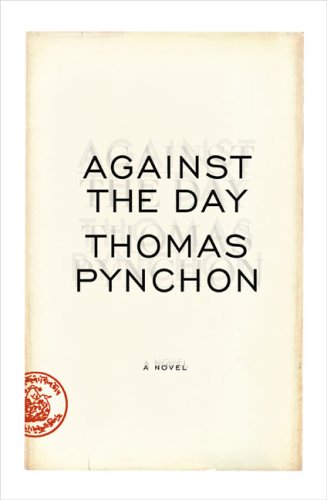 Knotty, paunchy, nutty, raunchy, Pynchon's first novel since (1997) reads like half a dozen books duking it out for his, and the reader's, attention. Most of them shine with a surreal incandescence, but even Pynchon fans may find their fealty tested now and again. Yet just when his recurring themes threaten to become tics, this perennial Nobel bridesmaid engineers another never-before-seen phrase, or effect, and all but the most churlish resistance collapses.

It all begins in 1893, with an intrepid crew of young balloonists whose storybook adventures will bookend, interrupt and sometimes even be read by, scores of at least somewhat more realistic characters over the next 30 years. Chief among these figures are Colorado anarchist Webb Traverse and his children: Kit, a Yale- and Göttingen-educated mathematician; Frank, an engineer who joins the Mexican revolution; Reef, a cardsharp turned outlaw bomber who lands in a perversely tender ménage à trois; and daughter Lake, another Pynchon heroine with a weakness for the absolute wrong man.

Psychological truth keeps pace with phantasmagorical invention throughout. In a Belgian interlude recalling Pynchon's incomparable , a refugee from the future conjures a horrific vision of the trench warfare to come: "League on league of filth, corpses by the uncounted thousands." This, scant pages after Kit nearly drowns in mayonnaise at the Regional Mayonnaise Works in West Flanders. Behind it all, linking these tonally divergent subplots and the book's cavalcade of characters, is a shared premonition of the blood-drenched doomsday just about to break above their heads.

Ever sympathetic to the weak over the strong, the comradely over the combine (and ever wary of false dichotomies), Pynchon's own aesthetic sometimes works against him. Despite himself, he'll reach for the portentous dream sequence, the exquisitely stage-managed weather, some perhaps not entirely digested historical research, the "invisible," the "unmappable"—when just as often it's the overlooked detail, the "scrawl of scarlet creeper on a bone-white wall," a bed partner's "full rangy nakedness and glow" that leaves a reader gutshot with wonder.

Now pushing 70, Pynchon remains the archpoet of death from above, comedy from below and sex from all sides. His new book will be bought and unread by the easily discouraged, read and reread by the cult of the difficult. True, beneath the book's jacket lurks the clamor of several novels clawing to get out. But that rushing you hear is the sound of the world, every banana peel and dynamite stick of it, trying to crowd its way in, and succeeding.