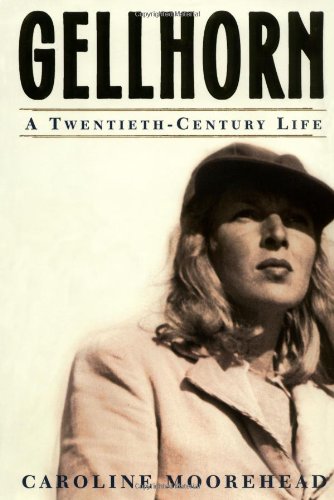 HMartha Gellhorn (1908–1998) was a woman of enormous accomplishment. Writer and journalist, she covered the major international conflicts of her lifetime, from the Spanish civil war to Vietnam, managed to land on Omaha Beach shortly after D-Day, entered Dachau a few days after it was liberated, observed the Nuremberg trials and, in the course of a long life, visited and wrote about most of the areas of the world. But she was a woman working in a man's world and, as the subtitle of Moorehead's first-rate biography reminds us, hers was a 20th century life, filled with all the contradictions between private and public existence experienced by most achieving women of her generation. As her first husband, Ernest Hemingway, put it before their acrimonious divorce, "Are you a war correspondent or wife in my bed?" a question Gellhorn finally answered by leaving him. As Moorehead shows, Gellhorn, at once tough and vulnerable, was surefooted in her professional life and capable of enduring friendships with people as varied as Eleanor Roosevelt, Robert Capa (some of whose photos are included) and Leonard Bernstein. Her intimate life was another matter, with both her marriages and her numerous affairs all ending in tears. Moorehead, the author of well-received biographies of Iris Origo and Bertrand Russell, was a friend of Gellhorn's, but the affection and admiration she feels for her subject (to whose papers she had exclusive access) does not prevent her from providing a vivid, balanced and fascinating portrait of a "woman who was oddly deaf to the intonations of feminism," and yet who paid a price for her independent spirit. 16 pages of b&w photos not seen by