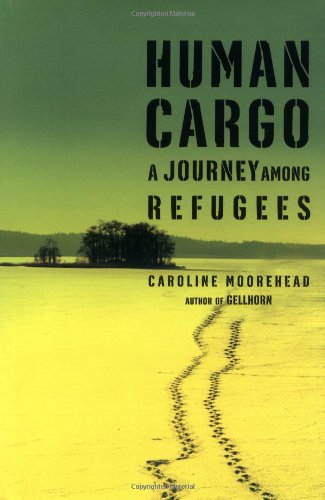 HUMAN CARGO: A Journey Among Refugees

The intractable, multifaceted problem of people driven from their homes by poverty, violence or persecution is given a human face in this moving survey of the refugee experience. Moorehead, a human rights journalist, refugee aid worker and biographer of Martha Gellhorn, tours a number of refugee milieus, visiting, among others, Liberian refugees in Cairo, Mexican migrants waiting to cross into the United States, Mideastern refugees detained in Australian internment camps and Palestinian refugees still nursing hopes of returning to a homeland they have never seen. She finds that refugees who remain in the Third World—the majority—are preoccupied with the struggle for survival. Those who make it to Western countries face an equally daunting task, caught in a legal limbo between asylum and deportation, forbidden to work, grappling with a strange language, loneliness and a society that views them as alien interlopers. Moorehead draws sympathetic portraits of individual refugees, replete with horror stories of the travails they fled and their precarious but hopeful efforts to build new lives, but also pulls back to examine what she says are the sometimes counterproductive policies of aid organizations and the indifference and callousness of Western governments.