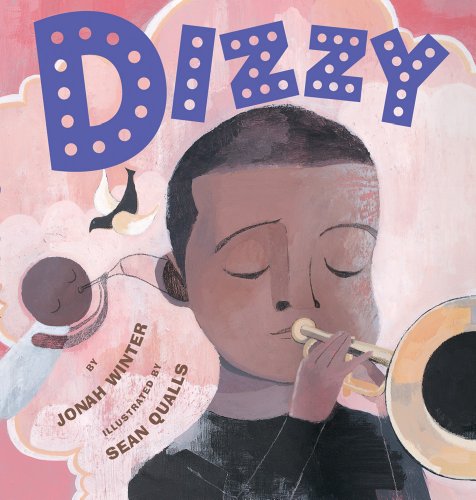 Winter ( ) adds a winning volume to the burgeoning array of picture books about jazz giants. Written in up-tempo, occasionally rhyming free verse, the narrative trips off the tongue as it sketches Dizzy Gillespie's early sufferings: his father beat him and other kids mocked his small size. The horn became his escape valve: "with every blow/ he got from his dad,/ he blew his trumpet that much more/ until he was ./ He was ./ He was the best musician/ in his little southern town—/ soon that got boring." Winter follows Dizzy from Philadelphia (where his onstage clowning earned him his nickname) to New York, where his career took off. Readers need not know anything about the man's music to appreciate the character at the center of this verse, which nimbly sketches his rise from swing band sideman to one of cool jazz's supreme innovators: " ' .'/ That's what Dizzy called/ this kind of jazz/ that he had invented just/ " Qualls's ( ) expressionistic acrylics, in a palette of cool grays, blues and chalk white, bloom with the blaring hot red and pink streams of sound emanating from Dizzy's horn. The artist gets the cheeks and the jazz patch just right, along with the postures of various cats onstage. And the author plays softly on the theme that one can convert a flaw (as a boy, Dizzy was famous for breaking rules) into a strength. Ages 4-8.