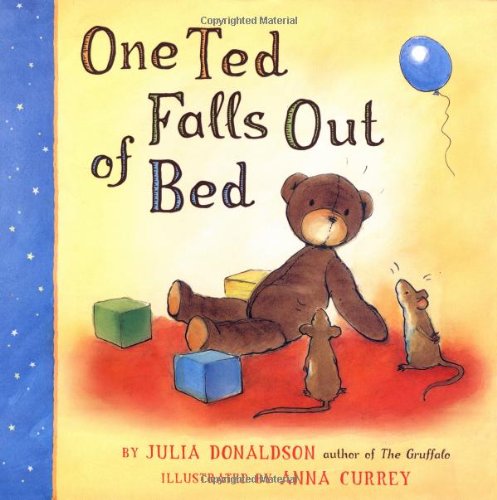 One Ted Falls Out of Bed

A teddy bear tumbles out of its owner's bed and, even though the toy "tugs and pulls the covers," the child remains oblivious ("two eyes are tight shut"). What's a bear to do? Donaldson ( ) and Currey ( ) show his attempts to wake the child, with the help of three rambunctious mice ("They roar around in four fast cars/ Then sit and gaze at five bright stars"). There's also a dainty tea with six dolls, a lively pillow fight with seven trolls and a jam session with nine plush frog musicians—before the construction of a staircase ("ten red bricks!") topples and brings about the desired results. Currey, in her watercolor-and-ink scenes, eschews nocturnal lighting in favor of sunny nursery colors that capture the giddy, magical fun. And readers who project a wealth of emotions onto their own teddy bears will be assured that while this plush fellow is clearly having a good time, he's not having a great time, and very much wants to be back in bed with the child. The final scene, the very definition of "warm and cuddly" is certain to elicit an "Ahhh" from readers of all ages. Ages 2-6.