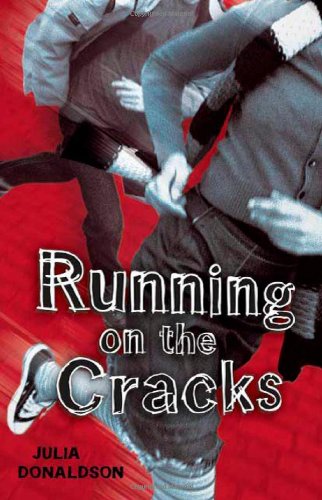 Running on the Cracks

This engaging, bittersweet story follows biracial British teenager Leonora (“Leo”) Watts-Chan, who was orphaned when her parents were killed in a plane crash, and has fled the home of her maternal aunt and perverted uncle. Interspersed with Leo’s first-person narration are third-person accounts of Finlay, a teenage goth wannabe who first encounters Leo when she steals a bag of doughnuts; the musings of Leo’s uncle, hot on her trail; and newspaper articles and letters. Rescued from homelessness by Mary, a former psychiatric patient, Leo is determined to find the paternal grandparents she has never met. With the help of unlikely friends and a string of coincidences, Leo finds her father’s family and learns the value of friendship (“I kind of think of the friends as my family too, as they’ve all been so good to me”). The characters in Donaldson’s ( ; ) YA debut are well drawn and their imperfections are authentic, particularly Mary’s battle with mental illness. Despite heavy themes, the story is neither bleak nor gritty. The fast pace and short chapters should appeal to readers, who will celebrate the hopeful ending. Ages 12–up.