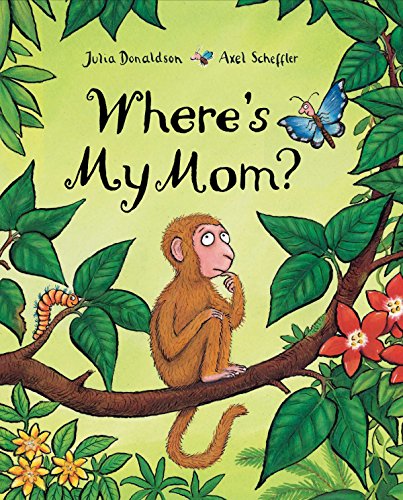 The creators of invent an engaging story about a little monkey looking for his mother. When the monkey says, “She's big!... Bigger than me,” a helpful butterfly takes him to an elephant. When he says his mother has “a tail that coils around trees,” the butterfly takes him to a snake. As the little monkey's descriptions continue to confound the butterfly, Donaldson squeezes in some basic animal facts. The monkey's mother, unlike the spider, would rather “eat fruit than swallow a fly,” and she doesn't have “claws or feathery wings” like the parrot. Scheffler's teeming jungle illustrations present easy-to-recognize animals. Each spread features a fresh expression of perplexity on the little monkey's face as he narrows his search terms. The rhymed text sometimes stumbles, using language that sounds more appropriate to an adult narrator (the monkey's lines include, “Oh, dear, what a muddle!” and “None of these creatures look like me!”). In a twist on the expected ending, the butterfly looks for an animal that resembles the little monkey and takes him to his father. The simple story and cheery illustrations will appeal to preschoolers, who will relate to the hunt for just the right words. Ages 4-8.