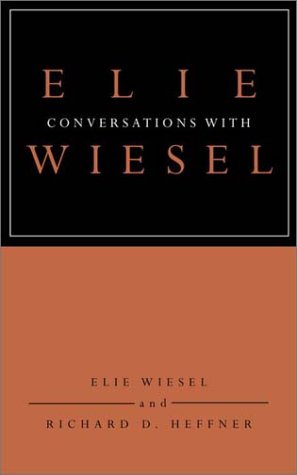 Nobel Peace Prize winner, Holocaust survivor and prolific author Wiesel (; etc.) continues to challenge political injustices and to keep memories of the Holocaust alive in the interest of preventing further horror. Over several years, Wiesel appeared on the PBS show , hosted by his friend Heffner (), professor of communications and public policy at Rutgers. These conversations, culled from the show's transcripts and from a video series called Dialogues, cover everything from the role of the intellectual in public life to the state and nationalism, religion and politics, capital punishment and euthanasia. Throughout, Wiesel speaks with prophetic authority, philosophical wisdom and a storyteller's verve and vivacity. On changing values in language: "We don't talk. We shout.... The civility is gone; not only the tenderness, but the friendship in discourse... we have to start again to teach our contemporaries how to speak.... When language dies, then violence becomes another language." On capital punishment: "I do not believe any civilized society should be at the service of death. I don't think it's human to become an agent of the Angel of Death." On the holocaust and memory: "people took the Holocaust and made it... commercial, they made it kitsch—why not say it?—kitsch. They trivialized it. In doing so, I think, they caused great harm and prejudice to memory." Always self-effacing, Wiesel repeatedly insists that he possesses no answers: "Actually, it's with I am good." These lively, engaging talks offer candid glimpses into the life and work of a leading moral thinker.