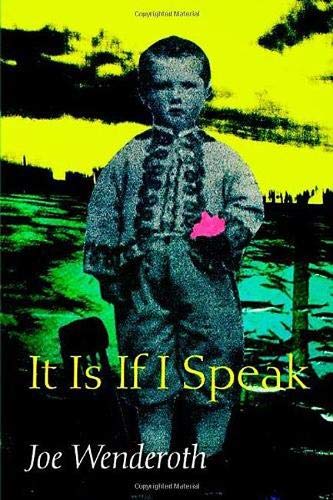 It Is If I Speak

Reducing sentience to slumber, reason to ritual, sight to shadow, the human to the abject and the animal, Wenderoth's exquisite evocations of finely discriminated loss offer moody evasions of concrete statement, electing paradox and abstraction over the death his entombed and enslaved personae fear will follow if they dare speak plain. The 54 poems, most of them brief, are governed by a handful of motifs: the evanescence of meaning and memory, the Orphic dismemberment to which the poet is inevitably destined, the violence native to presence, the mystery underlying human community. ""The pattern is only ever of animal success,"" Wenderoth writes in the opening stanza of ""Museum,"" ""the cry of a real gathering/ misheard and losing itself/ toward the idea of a sound/ which was not a blade."" The cry usurping utterance, the insistence upon imperfect perception (""misheard""), the shaded abstraction (""the idea of a sound"") and the hovering threat of the one concrete noun (""blade"") are all habitual devices of the volume, as are the deepening ambiguities repetition brings to the poem's denouement. Two longer poems structured as numbered catalogues, ""Restrictions"" and ""Things to Do Today,"" strain their short phrases toward surrealistic effects (""collide with the hidden zoo and act surprised by the amount of unnecessary sleep hidden therein"") and desperate humor (""said person believes the word `person' signifies, above all, a mobile, vacant, and consistently endangered habitat""), neither of which consistently succeed in lifting the monotony induced by obsessively repeated cognitive tricks. Much praised for his 1995 debut, Disfortune, Wenderoth shows himself in this second volume to be an competent inheritor of a abstraction-wearied symbolist tradition many had given up for dead. (Mar.)
close
Details