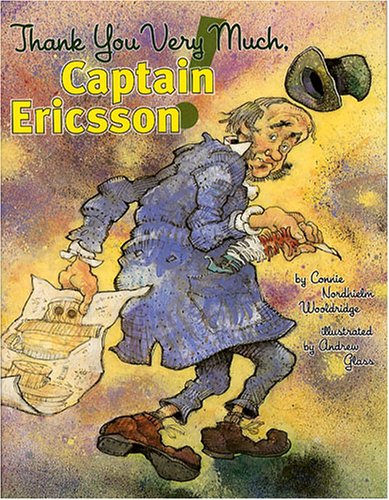 Thank You Very Much, Captain Ericsson

Initially, the title refers to the polite but woefully misguided dismissal of Captain John Ericsson's many brilliant inventions: his 1828 version of a fire engine with a steam-powered boiler ("Surely such a deluge would cause mischief"), quickly followed by a locomotive capable of an amazing 30 m.p.h. ("Was such speed... healthy?") and a screw propeller (deemed "highly suspicious" because it did its work "underwater, out of sight, and silently"). By book's end, however, the title refers to the gratitude of a nation, for Ericsson (1803-1889) was the inventor of the U.S.S. , the famous ironclad that helped the North win the Civil War. Wooldridge ( ) effortlessly carries readers along in her jaunt through what will likely be unfamiliar history, her prose striking the perfect balance between fact and attitude. Without lecturing, she makes it clear that Ericsson's success lay not just in his engineering acumen, but also in his willingness to believe in himself and to remain "fixed on the possible." (Readers who want to know more about the Swedish-born innovator can soak up the well-written endnotes on the final spread.) Glass ( makes an ideal partner for this enterprise: his ink-and-watercolor wash illustrations combine the spunk of editorial cartooning with the visceral punch of visual storytelling. He's equally adept at capturing the dunderheadedness of Ericsson's naysayers and the fiery thrills of a 19th-century naval battle. A fine addition to the shelves of any budding historian—or gearhead. Ages 4-8.