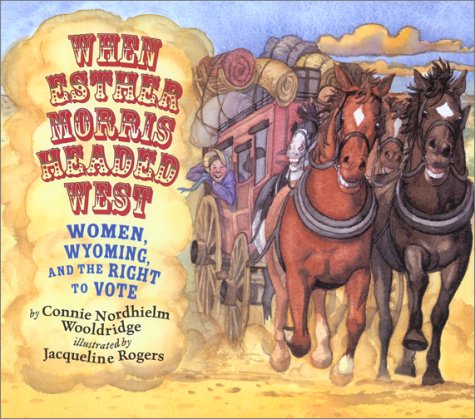 WHEN ESTHER MORRIS HEADED WEST: Women, Wyoming, and the Right to Vote

This inspiring tale of one woman's gumption and perseverance also recommends the forward-thinking men of Wyoming. Long before "feminist" became a household word, there was Esther Morris, a "large woman with wide-open ideas that needed more room than could be had in New York or Illinois, where she'd come from." The feisty 55-year-old heads out for the more liberal-minded Wyoming territory in 1869, and the legislature votes in favor of women's suffrage soon thereafter. Having won the right to vote, Morris runs for justice of the peace, thus becoming the first woman in the United States to hold a public office. Spicing her prose with a down-home twang, Wooldridge () pulls a plum out of the pie of American history. Rogers's () comic flair informs every inch of her expansive watercolors, especially the character sketches. She endows each with a distinct personality: the dumpling-cheeked Morris rolls her eyes while her doctor takes her pulse in order to show that "voting had no ill effects on a woman's health"; Col. William Bright, who championed women's right to vote, meets Esther while getting a shave at the barber shop; and Benjamin Sheeks, the biggest opponent to women's suffrage, makes a credible transition to supporter in Rogers's paintings. An afterword provides additional background on this seldom-profiled pioneer for women's rights. Ages 4-8.