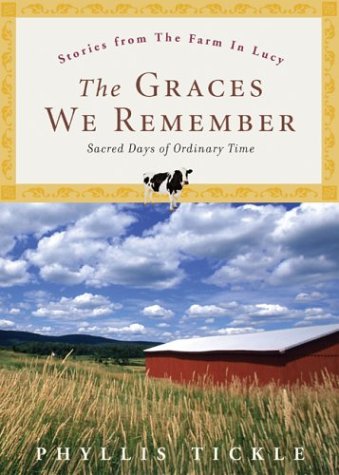 THE GRACES WE REMEMBER: Sacred Days of Ordinary Time

Tickle ( ), 's contributing editor in religion, finishes her Stories from the Farm in Lucy trilogy with grace, wit and keen spiritual observations. Following previous volumes on the sacred days of Advent and Lent, this one addresses the liturgical season after Pentecost, which the Christian church has traditionally given the modest label "ordinary time." But in Tickle's stories, these feast days of the summer and fall are anything but ordinary. As her family is privileged to witness a bull's remarkable ritual of mourning for a cow who died on their farm, Tickle realizes that they are treated to this display on the day before Michaelmas, "the one day of the year when all Christendom pays at least lip service to invisible realities and unseen orders." The feast day of Mary Magdalene (July 22), who was probably a prostitute, becomes an opportunity for Tickle to write about her sensuous, middle-aged hairdresser, Bonnie, who most certainly was: her downstairs salon put a genteel face on the more mysterious goings-on in her upstairs apartment. In one of the book's most poignant moments, Bonnie asks Tickle to write her into a book someday, since Bonnie worries that otherwise, no one will remember her life. Most stories are both funny and luminous. In "Just a Little about Lawrence," Tickle reveals that there is a "presence" at her house: a ghost named Lawrence who has been with the family for decades. It's a hilarious story, but very candid and full of both doubt and wonder.