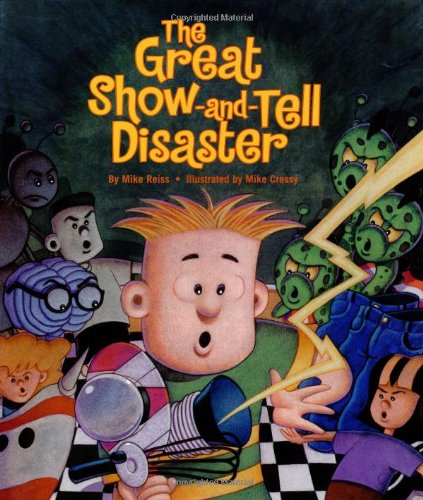 THE GREAT SHOW AND TELL DISASTER

Reiss () once again unleashes his knack for catchy, if occasionally forced, rhymes in another slapstick outing. Ned, when stumped at what to bring to school for show and tell resorts to a homemade Rube Goldberg contraption he dubs a "Word Mix-up Ray." His invention transforms his "aunt" into a "tuna," the grocer's "peas" into "apes" and his classmates, well—"He made a , with a big throbbing thinker,/ Changed to an and made a ." A catastrophic field trip to the art museum finds Ned gleefully modifying the gallery ("making from that hung on the walls," among other things), but eventually he finds a way to reverse the damage. Reiss's anagrams and corny light verse will appeal to a punchy sense of humor, but Cressy's colored pencil illustrations fare less well. Brisk, stylized cartoons reveal the artist's roots as an animator, but a grayish cast to the overall coloration dulls the spreads. It's an entertaining excursion nonetheless. Ages 5-up.