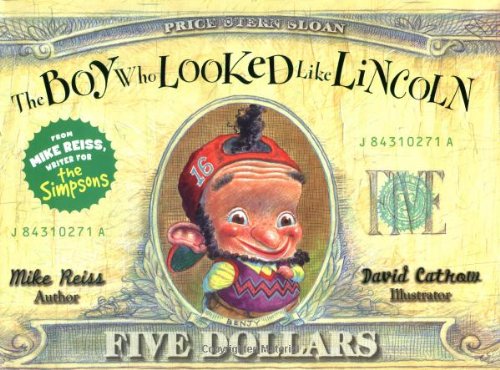 Simpsons writer Reiss and Catrow are back for a third pairing ( How Murray Saved Christmas), their class clown hearts beating as one. Benjy, the hero, does indeed bear a startling resemblance to the famously homely 16th president. "In every school play, I have to be Lincoln. Even if he's not in the show," Benjy complains, as Catrow shows him incongruously commanding the stage during a school play on dental hygiene. Teased relentlessly ("Hey, Stinkin' Lincoln!"), Benjy has resigned himself to spending the summer in his room when his parents announce he's going to Camp What-Cha-Ma-Call-It, "the camp for kids who look like things." Surrounded by campmates who are dead ringers for a frog, a back of a horse and even a toaster (Catrow comically and effectively translates these descriptions quite literally), Benjy not only finds comradeship, but also a new sense of pride. Back home, he vanquishes the bullies with some Lincoln-like eloquence, and is even elected class president. Now, if he can only develop the same fortitude in his baby brother Dickie—who bears a scary resemblance to the 37th president (Catrow underscores the Nixon punchline by depicting Dickie making a "V" sign and recording himself on a reel-to-reel). This is great entertainment, and, at its heart, a touching love letter to all the kids who wish they didn't stand out quite so much. Ages 3-up.