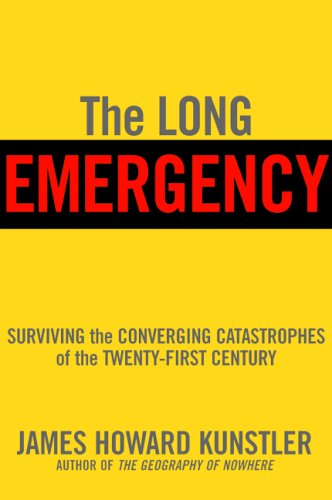 THE LONG EMERGENCY: Surviving the End of the Oil Age, Climate Change, and Other Converging Catastrophes of the Twenty-First Century

The indictment of suburbia and the car culture that the author presented in turns apocalyptic in this vigorous, if overwrought, jeremiad. Kunstler notes signs that global oil production has peaked and will soon dwindle, and argues in an eye-opening, although not entirely convincing, analysis that alternative energy sources cannot fill the gap, especially in transportation. The result will be a Dark Age in which "the center does not hold" and "all bets are off about civilization's future." Absent cheap oil, auto-dependent suburbs and big cities will collapse, along with industry and mechanized agriculture; serfdom and horse-drawn carts will stage a comeback; hunger will cause massive "die-back"; otherwise "impotent" governments will engineer "designer viruses" to cull the surplus population; and Asian pirates will plunder California. Kunstler takes a grim satisfaction in this prospect, which promises to settle his many grudges against modernity. A "dazed and crippled America," he hopes, will regroup around walkable, human-scale towns; organic local economies of small farmers and tradesmen will replace an alienating corporate globalism; strong bonds of social solidarity will be reforged; and our heedless, childish culture of consumerism will be forced to grow up. Kunstler's critique of contemporary society is caustic and scintillating as usual, but his prognostications strain credibility.