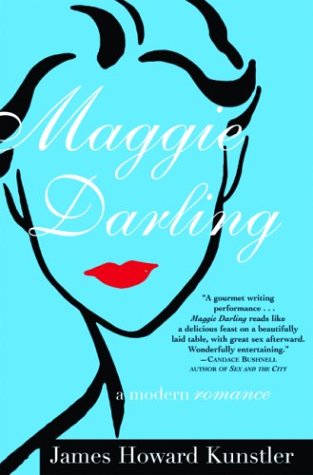 Kunstler's first novel in over 10 years reflects, in deliciously funny and satiric fashion, some of his spirited nonfiction critiques of contemporary culture ( ; ). Maggie Darling is a mid-career Martha Stewart type and aptly described media darling. But when her millionaire husband, Kenneth, snogs a pretty young thing during Maggie's celebrity-studded, career-enhancing Christmas party, "the goddess of hearth and home" faces a test of her prodigious inner resources. Maggie's picaresque romantic adventures begin with an affair in Venice with a British rock icon turned movie actor, followed by a misguided evening with a besotted photographer and a weekend in Vermont with her charming but disingenuous editor. Kunstler's details are perfect: the mouth-watering menus, the designer clothes, the name-dropping of celebrities both fictional and real. Maggie struggles to sort out a variety of betrayals and romantic disappointments while also building her multimillion-dollar catering, book and television empire. Items on her to-do list include attending to Lindy, her heartbroken, drug-addled college friend; hosting her son as he takes a break from Swarthmore and makes some dubious professional associations; and dealing with the death by sniper of her beloved gardener. While most of the secondary characters serve only as foils for Maggie and her grand dilemmas, Kunstler's great achievement is the creation of a surprisingly well-rounded and sympathetic heroine. Maggie isn't insensitive—her compulsive list making is a coping mechanism. And though Kunstler betrays his heroine as the plot devolves into farce, loose ends tie up as pretty as a Christmas bow and the novel radiantly succeeds as a contemporary comedy of manners.