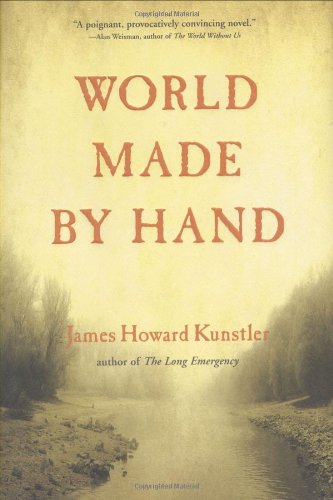 World Made by Hand

Kunstler’s name is mostly associated with nonfiction works like , a bleak prediction of what will happen when oil production no longer meets demand, and the antisuburbia polemic . In this novel, his 10th, he visits a future posited on his signature idea: when the oil wells start to run dry, the world economy will collapse and society as we know it will cease. Robert Earle has lost his job (he was a software executive) and family in the chaos following the breakdown. Elected mayor of Union Grove, N.Y., in the wake of a town crisis, Earle must rebuild civil society out of squabbling factions, including a cultish community of newcomers, an established group of Congregationalists and a plantation kept by the wealthy Stephen Bullock. Re-establishing basic infrastructure is a big enough challenge, but major tension comes from a crew of neighboring rednecks led by warlord Wayne Karp. Kunstler is most engaged when discussing the fate of the status quo and in divulging the particulars of daily life. Kunstler’s world is convincing if didactic: Union Grove exists solely to illustrate Kunstler’s doomsday vision. Readers willing to go for the ride will see a frightening and bleak future.