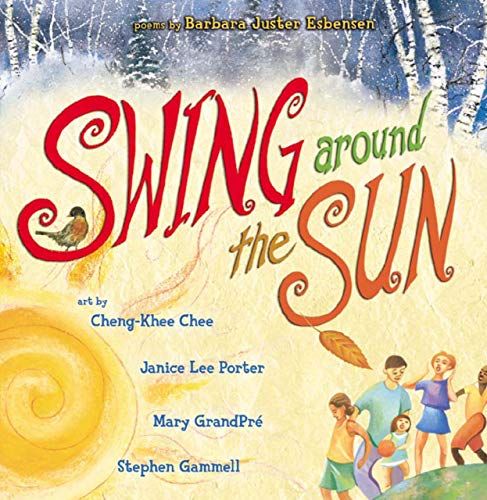 SWING AROUND THE SUN

This collection of Esbensen's poems, organized by season, is as linguistically exquisite and fresh as it was when it first appeared in 1965, but the artistic pairings are unfortunately not of the same consistently high quality. Each artist takes one season. Both Chee and Gammell respond to Esbensen's poetry with imagination and wit, inviting readers into the dense imagery. A spread by Chee (), for instance, dramatically introduces "Spring," with an eruption of color resembling dogwood blossoms and newly unfurled leaves. His closing spread for "Robin" depicts the birds as both witness to and part of the season's quiet theatrics ("Does he hear the grass grow,/ Seeds split wide?"), and his use of color circles back to his opening palette. Gammell's swirling strokes of icy aqua and cornflower blue (which recall his ) by turns convey frolicsome children (e.g., "We glitter and fly/ Beneath the sky" in "Skating") and a mystical presence (as in "The Wind Woman"). On the other hand, Porter () and GrandPré () seem at times to favor design at the expense of a poem's tone or substance. For example, "The Cove," with its stark language ("Spars, half-buried,/ Bleach there on the stones") suggests a darker, more brooding mood than the somersaulting seagulls pictured. But Esbensen's poems are so delicate and layered in metaphor, and some of the artwork so spectacular, that this updated edition will appeal to a wide variety of readers. Ages 4-7.