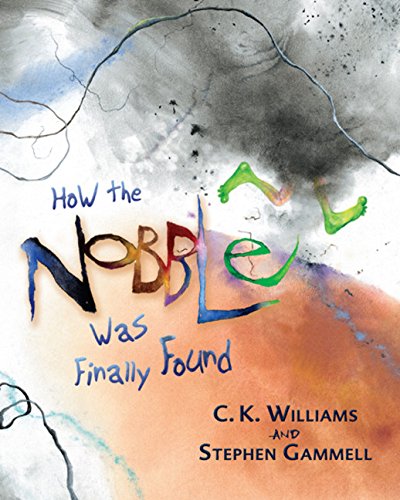 How the Nobble Was Finally Found

The lonely Nobble (an implike creature with “two lovely wings and little claws on his fingers and a bunch of nice toes”) has never met another living being, but after a long journey he is found by a girl who, in turn, leads him to another Nobble. The Nobble-meets-Nobble romance charms, as does the creature's E.T.-like naïveté. Because he's never met anyone else, he not only must learn what a door is but also what knocking is, and the importance of saying “Who's there?” instead of “Where when?” Caldecott Medalist Gammell, working in an eerie rather than sprightly mode, renders the Nobble as Williams describes him, but avoids visualizing some of the text's more fanciful images (as when the Nobble takes walks “on the bumps under the word asparagus or,... in the river that runs along beneath piano strings”). Instead, he paints the Nobbles in cloudy alien landscapes of gray, shot through with spidery filaments. Williams's text (there's a good deal more than in the average picture book) looks dense but reads lightly. Once past the initial dreariness of the Nobble's solitary existence, the story moves swiftly toward its end, with sweetly poignant giggles throughout. Ages 6–9.