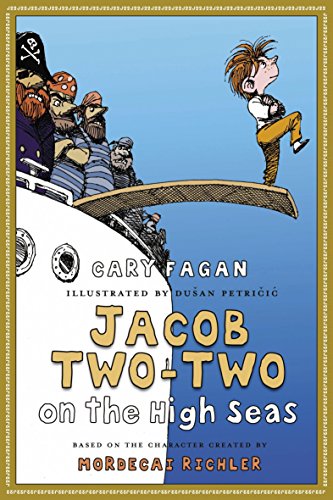 Jacob Two-Two on the High Seas

Fagan (the Kaspar Snit novels) continues the late Mordecai Richler’s three-book series starring an earnest boy whose name reflects the facts that he is “two plus two plus two years old” and that “nobody in his family ever heard him the first time, so he had to say everything two times.” Set after Richler’s first installment, , this novel opens as the clan, relocating from England to Canada, ships out on the SS , skippered by an amusingly vain and clueless captain. Passengers include acrobat brothers, an inept ventriloquist, a luckless toy inventor and Jacob’s spunky new pal, Cindy. Droll interaction among the characters spins into slapstick when bumbling pirates board the ship and shanghai Jacob and Cindy as pirates-in-training. Fagan crafts a zany tale that kids (in the spirit of Jacob’s doublespeak) will want to read at least twice. Petricic, whose line art complements the story’s humor, also illustrates new reissues of Richler’s previous Jacob Two-Two titles. Ages 8–11.