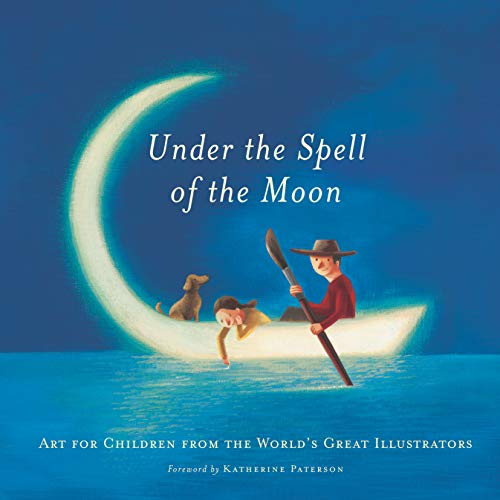 UNDER THE SPELL OF THE MOON: Art for Children from the World's Great Illustrators

In a brief, thoughtful foreword, Katherine Paterson pays tribute to the late Jella Lepman, founder of the International Board on Books for Young People (IBBY), devoted to bringing books to children all over the world. Aldana's introduction explains that an international group of 33 well- and lesser-known children's book illustrators, donated their work to this project, illustrating poems or passages they have either selected or written themselves (the texts appear in both their original language and in English). Verbally and visually, the entries vary from simple to cryptic, playful to haunting. Mitsumasa Anno contributes an original poem equally as affecting as his full-spread picture celebrating children everywhere; Vera B. Williams offers a cheerful visual variation on the song that begins, "There were five in a bed…"; South African artist Piet Grobler contributes a painting of humans and creatures with voices raised in song, inspired by a Philip de Vos poem ("... Don't be silent/ nor afraid,/ you must sing/ as you've been made"). Both Indian artist Pulak Biswas and Peter Sís (who claims both the Czech Republic and the U.S. as home) use traditional texts as a jumping off point for two very different renderings of a rhinoceros. Short biographical sketches of each contributor appear at the end of this handsomely designed compendium, a vibrant testament to the range and resonance of contemporary children's book illustration all around the globe. Ages 4-up.