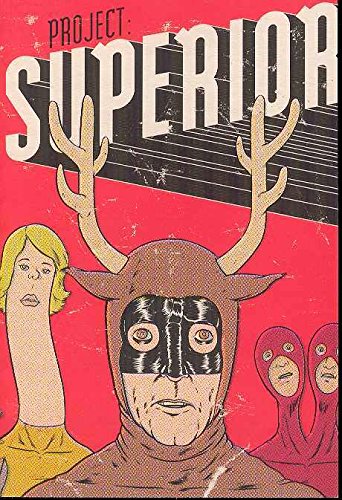 Many underground cartoonists define their work at least in part by its relationship to the superhero comics mainstream: they're against it. But superhero comics are also the teat at which many of those cartoonists suckled, and this meaty anthology challenges a few dozen artists who generally steer far clear of superheroes to do short comics about them. Most of the results fall into a few basic categories, the most popular of which is slice-of-life stories about quotidian experience rendered ridiculous by everybody wearing Spandex outfits (notably Nick Abadzis's "You Can't Always Get What You Want"; Scott Morse's "The Solutionist"; and J.W. Cotter's "Sucker Punch"). A handful of artists (Chris Pitzer, J. Chris Campbell, Nathan Jurevicius) contribute pieces that are less actual stories than smooth graphic design inspired by cape-and-cowl iconography. Others use superhero fantasies as a metaphor for childhood trauma and dreams of revenge (Mike Dawson's "Ace-Face"; Farel Dalrymple's "Hollis"; and best of all Jamie Tanner's creepy, bold "Blink," which riffs ingeniously on children's fantasies of moral authority). Among the book's other standouts, Jeffrey Brown contributes a nutty, way-over-the-top slugfest (in the vein of his recent ) concerning a one-eyed, tentacle-armed hero called Cycoloctopus; and R. Kikuo Johnson's "Thrustman" is a clever if sometimes baffling piece of metafiction.