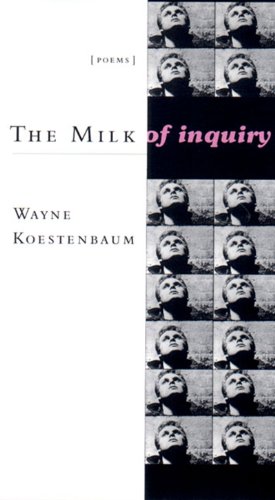 The Milk of Inquiry: Poems

""I don't want to know what I'm forging, I want to glide/ past obligations ampler than I've guessed..."" Slack, odd and ravishing, Koestenbaum's poems take spectacular risks--constantly self-lacerating, curtly erotic and courting of clich : ""father has big tanned tennisplaying nose/ I'd like him to be my shrink/ maybe strip him...."" A pervasive flatness of tone matches the poet's laconic, self-proclaimed lack of sensation, one that is uncannily effective in conveying a desperate ennui, yet coyly manages to place itself within a particular pantheon: ""Hollywood single bed in a letter by O'Hara/ decrescendo in a sonata by Beethoven/ blankness in a life by me."" The 28 lyrics of the book's first section are perhaps Koestenbaum's best, complexly disclosing his relationships to family, lovers, books, music, life: ""I miss how slow the world used to be,/ before I ruined it, this morning, with my crazy deliberations./ I miss the poisoned, old momentum of last night."" Relentlessly name-droppy--""I like dropping their names/ it's as if I'm dropping their whole oeuvres""--the long poem ""Four Lemon Drops"" recalls the title poem of Rhapsodies of a Repeat Offender in its unflinching, poetically reflexive self-examinations, coming this time in jagged, accretive quatrains. Wildly (Wilde-ly?) ambitious if less successful is a section of 115 sonnets, ""Metamorphoses (Masked Ball),"" where Medusa, for example, can speak as Mae West, Ronald Firbank or Walt Disney, and Echo as Rosa Luxemburg, George Platt Lynes or John Ashbery--and many others. A poet, cultural critic (Jackie Under My Skin; The Queen's Throat) and curator, Koestenbaum, in his third book of poems, presents scarily seductive surfaces, only partially concealing a concern with the very deepest questions. (Apr.)
close
Details