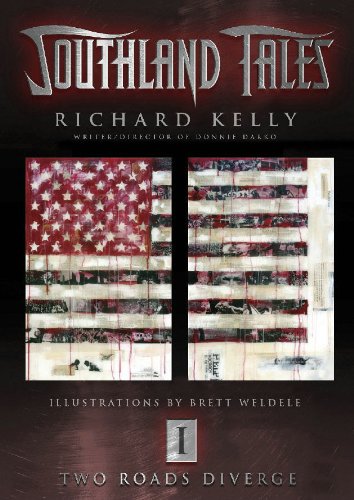 Kelly's film was full of mysterious happenings that tied into the emotional tale of an oddball high school boy. This graphic novel, the first of three that lead up to the upcoming film of the same name, continues Kelly's tradition of intriguing concepts but on a much grander scale. This volume alone introduces a Guns 'n' Roses-like singing porn star, a roller coaster that can travel through time, an amnesiac movie star and what must be one of the stupidest screenplays ever written. Through strong character work and swift storytelling, this book channels a certain modern zeitgeist of terrorism fears, the loss of privacy and the cutthroat world of celebrity. The book takes place in 2008, following twin atomic attacks on Texas that have made the United States a version of Orwell's envisioned future, although Orwell didn't think to include online gambling and strip clubs into his story of fascism. Weldele's art is loose and sketchy, but also expressive when dealing with these wildly different characters. His coloring creates a great sense of atmosphere that is lonely and oppressive, perfect for the story's subject matter, which is basically an intriguing setup for what will hopefully pay off in the film.