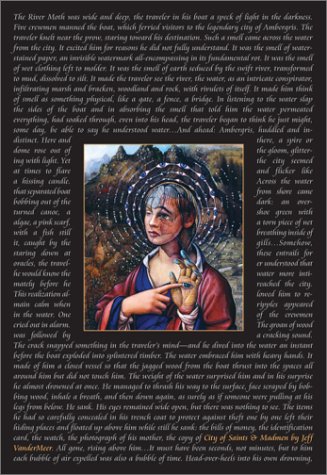 CITY OF SAINTS AND MADMEN

A master of postmodern game playing, VanderMeer () here gathers all the fiction published in his earlier trade paper collection (also titled, in a typically Borgesian maneuver, ), plus an equal amount of new material. Set in the haunted city of Ambergris, with its Borges Bookstore, these stories feature bizarre recurring characters and intensely self-referential plots. Among the highlights are the World Fantasy Award–winning "Transformation of Martin Lake," the tale of a talented painter who's obsessed with a great composer; "The Strange Case of X," which concerns an incarcerated lunatic found wandering the streets of Ambergris carrying the very book being discussed in this review; the wonderful new story "The Cage," in which an antiques dealer becomes infected with a fungus that's slowly taking over much of the city; and, oddest of all perhaps, an untitled short story, which fills the entire dust jacket and concerns an unnamed traveler who has a close encounter with a giant squid in the river that runs through Ambergris. Other pieces take many forms, including a history of the city complete with footnotes, psychiatric records from a local hospital, an amazingly funny work of pseudo-biology entitled "King Squid" and entirely bogus bibliographies and glossaries. This beautifully written, virtually hallucinatory work isn't for every taste, but connoisseurs of the finest in postmodern fantasy will find it enormously rewarding.