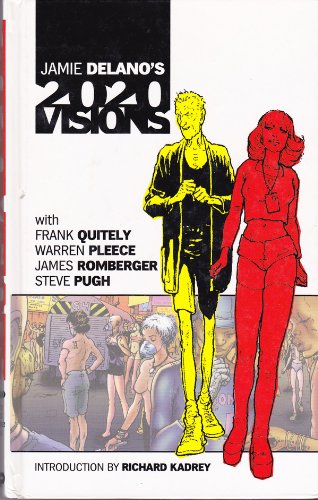 These four vaguely linked dystopian stories about America's near future were originally serialized as a comic book in the late '90s, and their ideas about what's coming are already a bit out of date. The main point of interest right now is that the first story is drawn by Frank Quitely of fame. That story, "Lust for Life," is this book's highlight, a darkly daffy evocation of a plague that makes its disenfranchised victims sex-mad before it kills them, set in the desiccated New York City of 2020. Quitely's hyper-detailed, warts-and-all artwork suits the piece nicely. "La Tormenta," a hard-boiled detective story with a female-to-male transsexual PI investigating a murderous plastic surgeon who rebuilds unwilling bodies, has its moments, too, though it's clear Warren Pleece's artwork was originally meant to be seen in color rather than (as it is here) in b&w. But the William Burroughs-influenced squalor and grotesquerie that Delano indulges in constantly have no real payoff, and James Romberger and Steve Pugh's artwork for the final two arcs (which both concern sectarian wars and mass infertility) is ugly and frequently unclear. There are plenty of clever ideas here, and the satire of American xenophobia and sex-terror from Delano's very British perspective is sometimes amusing; unfortunately, it all doesn't hold together as a single book.