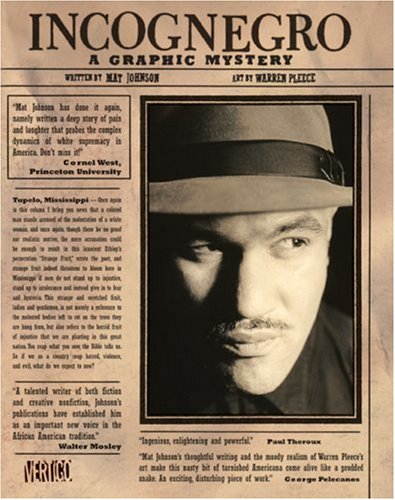 The brows are furrowed and teeth mightily clenched in Pleece’s noirish artwork for Johnson’s pulpy tale of a black journalist who goes undercover in the 1930s South to investigate a possible trumped-up murder charge against his brother—a charge that could lead to a lynching. Zane Pinchback, who is so light-skinned he can pass for white with a little cosmetic help, writes the “Incognegro” column for a Harlem newspaper, and his beat (like that of many a brave black journalist at the time) is the bloody circus of lynchings still claiming lives in horrendous numbers. Johnson’s tale is a smart and fast-paced one, particularly when dealing with Pinchback’s reluctance to return to Mississippi (wisely preferring his comparatively sheltered Harlem life). Once he’s back down South, the twists and turns of the story come fast and thick, goosed by the not particularly trustworthy explanations being given by Zane’s moonshine-distilling brother, and the attention-drawing antics of Zane’s playboy friend Carl, who invited himself along on a lark. Johnson and Pleece have done a mostly commendable job, though the plot gets too knotted for its own good long before the conclusion, but they give a cracking Chester Himes kick to what could have been a sub–Walter Mosley imitation.