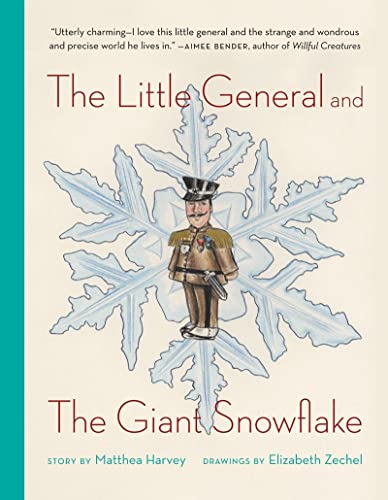 The Little General and the Giant Snowflake

This tidy allegory about the importance of imagination pits a group of Realists, led by a diminutive and orderly general (who has a meticulously tended flowerbed and an appreciation for the blind devotion of lemmings) against an army of Dreamers. Not that there's ever any actual fighting (“The Dreamers were always too busy playing games. But the little general thought it best to be prepared”). However, the general's discovery of a giant snowflake one morning becomes the first crack in his steely facade; soon he's having surreal dreams and losing his grip on his loyal army. With the help of two soldiers—Sergeant Samantha (who has braided pigtails, rectangular glasses, and a clandestine crush on the general) and the bumbling, free-spirited Lieutenant Lyle—and the Dreamers themselves, the general learns that a little imagination can go a long way. Both Zechel's ( ) whimsical grayscale drawings and Harvey's lovely, straightforward prose are characterized by an understated sense of humor that should give the book crossover potential. Ages 8–up.