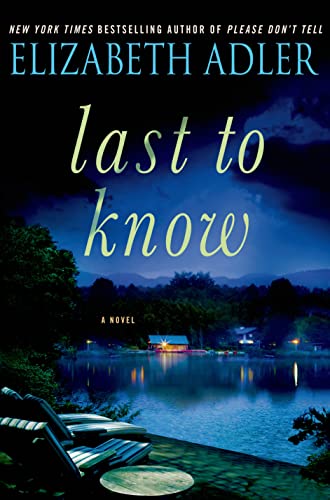 In this plodding whodunit from Adler (Please Don't Tell), Boston homicide detective Harry Jordan retreats to his lakeside cabin in Evening Lake, Mass., to decompress after the recent breakup with his fianc%C3%A9e, Mallory Malone. But he can't relax for long when a neighboring house, belonging to Lacey Havnel and her daughter, Bea, suddenly goes up in flames, with Bea the only survivor. Little is known about the Havnels among the small community of Evening Lake, but the unofficial matriarch of the area, Rose Osborne, agrees to take 21-year-old Bea in while the investigation into the fire continues. Rose and her husband, acclaimed suspense novelist Wally Osborne, share their home, known as a haven of calm, with oldest son Roman, twins Madison and Frazer, and youngest son, Diz. When Jordan digs deeper into the lives of Lacey and Bea, he's surprised by the larcenous trail he discovers, making him question whether the fire was an accident after all. In predictable fashion, another corpse shows up, and the Osbornes are revealed to be more complex than they first appeared. Readers will find nothing new or revelatory, and the interstitial sections written by "the killer" are more annoying than insightful. Agent: Anne Sibbald, Janklow & Nesbit Associates. (July)
close
Details