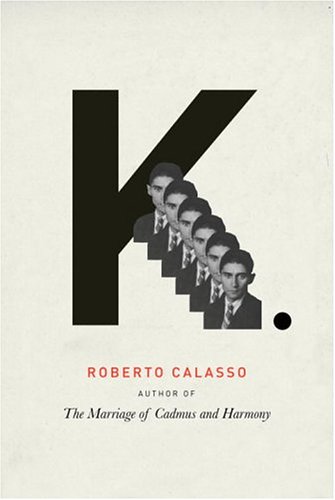 Calasso's study is a milestone not just in the ever burgeoning literature about Kafka, but in literature itself. This remarkably elegant essay gains its intellectual authority from Calasso's tone: he's amazingly well read, without being a factotum of any particular discipline. Elias Canetti remarked that Kafka was, as a writer "so utterly himself" that the critic "must, even at the risk of seeming slavish, adhere as closely as possible to his [Kafka's] own statements." Calasso follows this advice. Among the insights into that make the first four chapters a must for interested readers of that work is the way in which Calasso sees K. as a continuation of Josef K, the hero of Kafka's earlier . " " Calasso claims, "is Josef K's " ("the intermediate state" in the ). Calasso is so intimate with the texts, including the diaries, short stories and , that his voice sometimes emerges uncannily from the texts themselves, as though he were one of those mysterious exegetes that Kafka loved to put in his stories. Particularly astute is Calasso's observation that the image of the assimilated Jew runs through the novels like a great latent anxiety dream, leading outward, to Kafka's prophetic sense of the insecurity of the Jews in Central Europe, and inward, to the household of Kafka's father. Kafka has had marvelous interpreters in the past, including Walter Benjamin, Canetti and Maurice Blanchot. Without exaggeration, Calasso ( ) belongs in this elevated company.