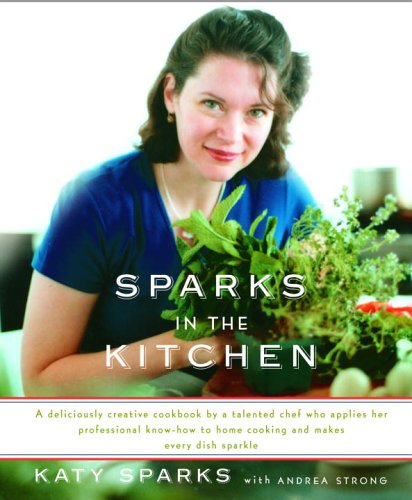 Sparks in the Kitchen

Sparks's food looks comfortably rustic, corresponding to her childhood on a Vermont farm, occasional visits to Germany and a move to New York, where she opened Quilty's, a SoHo restaurant that felt like a country inn (it closed after 9/11). The chef's hallmark is combining flavors and textures in unexpected ways; hence, there's papaya in her Gazpacho, ground star anise and coriander in a Seasonal Country Salad, and chilled cucumbers against hot scallops in Seared Sea Scallops on a Cool Cucumber, Sesame, and Dill Sauce. Sparks is no fusspot, advising readers "have fun and don't sweat the details." For example, in the recipe for Simple Roast Chicken, she notes, "Chicken is a perfect vehicle for experimentation," so try stuffing the bird with a half a lemon, a sprig of herbs, a few mushroom stems—anything that'll release flavor and aroma. Most of the 160 dishes featured can go fancy or casual; a perfect example is Smoked Trout Tartare with Cucumber, Feta, and Dill, which can be "dressed down with a beer or gussied up with a glass of sparking wine." Sparks's family features prominently in the essays and recipe introductions, adding to the homey, casual feel of this handsome volume. Photos.