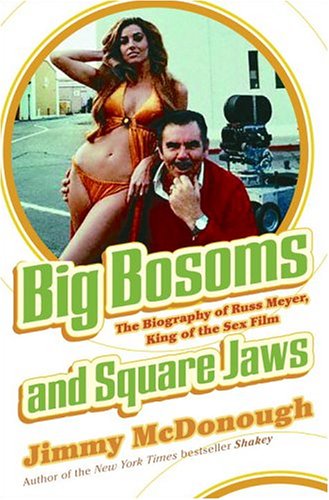 God I love slang, I really do, especially when it's used to write a biography of a man obsessed with only two things in life: WWII and heaving, pendulous breasts."

Subtitled The Biography of Russ Meyer, King of the Sex Film, McDonough's work paints a two-fisted tale of the legendary filmmaker who helped launch the sexual revolution with his scandalous in 1959; caused a rip in the time/space continuum of the psychedelic 1960s with and ; and clenched the beatnik and punk ethics with , and .

Meyer was a square who helped define hip in an unhip time—those incredibly boring 1950s.

Way cool, except that books that rely on slang don't usually read too well. Witness Meyer's own three-volume autobiography, . It's an unreadable 1,150-page work that pursues the diary of a breast fetishist. Very interesting, but monotonous.

leaves you thanking God for McDonough's book, which, like Meyer's, pushes the limits of vernacular use, but, unlike Meyer's, succeeds, because McDonough's slang is so damn funny—as in: "A stiff swirl of cotton-candy blond hair, lips like over-stuffed couches mating, a lethal weapon body—there was something plain wicked about Lorna Maitland. Her terminally unimpressed scowl seemed to suggest that your balls were not long for this world."

Although McDonough ( ) infuses his book with well-researched history, he always comes back to Meyer's obsession with buxom gals: "Meyer likened the process to an affair. After poring over every inch of their bodies with his camera eye, he'd grow bored—and so would they.... Once you've unwrapped them, the thrill is gone."

But what if you really don't care about an incredibly immature man who spent his whole life engaging in "quickies," producing and directing cheap films about stacked women and hanging out drinking with his WWII buddies?

Here McDonough hits on a stroke of genius—he displays Meyer nurturing his macho image and melting down when that image is breached.

is a fun, twisted romp through the life of one of America's most celebrated, sordid—and ultimately sad—filmmakers. Given that Meyer died last year, McDonough has done us all a favor by being serious enough to write the silly and cerebral story of a cad who defined America's lowbrow culture. Photos.