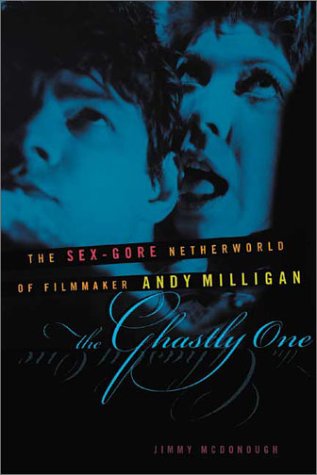 THE GHASTLY ONE: The Sex-Gore Netherworld of Filmmaker Andy Milligan

Milligan's greatest films were , , and (a violent, bloody rape revenge fantasy that was a cross between and ). Shooting on budgets that hovered around $10,000, Milligan—who turned out 29 movies between 1965 and 1988—was infamous; his movies were appallingly shot, often ludicrously plotted shock films that played in 42nd Street grind houses, drive-ins and avant-garde film festivals. No easy subject for a biographer, Milligan, who died of AIDS in 1990 at the age of 61, was drawn to (in no particular order) drugs, violence, s&m sex, misogyny and general weirdness. McDonough's verbatim interviews, which form the spine of the book, reveal a man who could be alternately brutally honest, obstructionist, deceitful and quite kind. McDonough (who has written for the and ) is careful to add well-researched, nuanced context. His portrait of Milligan's importance to the famous Caffe Cino, for example, considered to be the beginnings of Off-Broadway, are startling, notable additions to theater history. Although McDonough is a loyal fan—he even worked with Milligan's production team as part of his research—he maintains a critical eye and provides a worthy historical overview of both the aesthetics and business of exploitative cinema. Students of popular American culture, film, as well as of gender and gay and lesbian studies, will relish this intelligent portrait. 91 b&w photos. . (.)