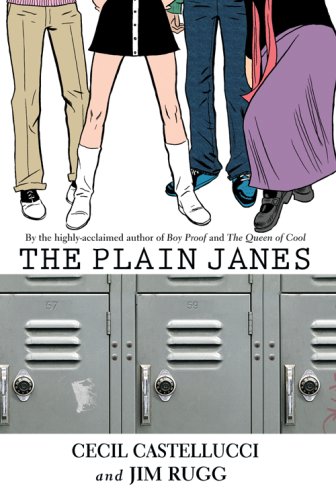 DC Comics' imprint of graphic novels for girls, Minx, starts off with a bang with this elegant story of art in the suburbs. As Jane walks past a sidewalk café in Metro City, a terrorist's bomb goes off. Her parents, overtaken by fear, move the family to the small town of Kent Waters. The popular girls at Buzz Aldrin High court her, but Jane wants to be an outsider. She finds three other girls named Jane, all of them unpopular in different ways—one is "Brain Jane," one an aspiring actress and one an athlete—and together the four of them make "art attacks" on the city, leaving the name P.L.A.I.N. (People Loving Art In Neighborhoods) wherever they go. They build pyramids on the site of a planned strip mall ("The pyramids lasted for thousands of years. Do you think this strip mall will?") and populate the police department's lawn with gnomes. But to a community consumed with elevated threat levels, the attacks seem more ominous than generous, and P.L.A.I.N. becomes an outlaw group. All the while, Jane continues to write letters to John Doe, the unidentified man whose life she saved during the bombing—and who sits in a hospital, comatose, his sketchbook serving as her muse. Castellucci ( ) and Rugg (co-creator of Street Angel) nimbly make their larger point—that fear is an indulgence we must give ourselves permission to overcome—without ever preaching, and without neglecting the dynamics of a page-turning coming-of-age story. Ages 12-up.