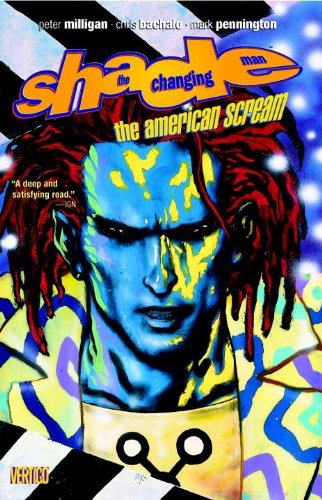 This collection of the first six issues of Milligan's tells the story of Rac Shade and Kathy George. Shade has come to Earth from his home planet, Meta, to suppress Earth's bubbling insanity, which has created an "area of madness" between it and Meta. Unfortunately, Shade finds himself in the body of an about-to-be executed serial killer, Troy Grenzer, and then in the company of Kathy George, the daughter of Grenzer's last victims. Shade and Kathy take off on the run across an America where everyday fantasies and obsessions are taking physical form. They throw themselves headlong into the heart of Shade's mission to control this madness. Milligan uses this far-fetched, pulpy premise mostly as an excuse to explore America geographically and thematically. He devotes an entire issue to the JFK assassination, eloquently riffing on the event's national trauma. In the volume's penultimate episodes, Hollywood runs amok, as movies come to life and actual casting couches chase starlets. Through it all, Shade and Kathy try to understand their own personal confusions. They are well-rounded, empathetic characters: Kathy's haunted by death, and Shade's just learning about Earth and America. They are perfect ciphers through which Milligan can operate. Bachalo and Pennington's expressionistic artwork and surreal tendencies perfectly complement Milligan's story, which veers from the real to the very unreal extremely quickly. This collection, while not for the faint of heart, shows just how far the superhero genre can be taken with honesty and wit.