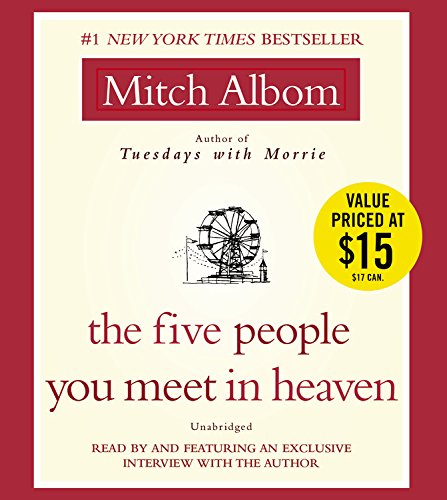 THE FIVE PEOPLE YOU MEET IN HEAVEN

This life-affirming fable ironically opens at the end of the life of a seemingly ordinary man. Known as "Eddie Maintenance" to those he works with at Ruby Pier, Eddie led what he saw as a disappointing life working as head of maintenance at a seaside amusement park. Upon his death, he learns that heaven is a place to make sense of his time on earth and that he will meet five people from his life who will help him understand its greatest lessons. Accompanied at times by music that sounds psychedelic rather than heavenly, reader Singer conveys this uplifting story in an earnest manner. However, the soft-spoken intonations he employs for women and the gruff but bashful voices he uses for men add an extra dose of sweetener to this already sentimental tale, as does Singer's plaintive rendition of Eddie and his wife Marguerite's song, "You made me love you." Still, those who turn to this audio book for Albom's ( ) musings on the meaning of life will not be disappointed.