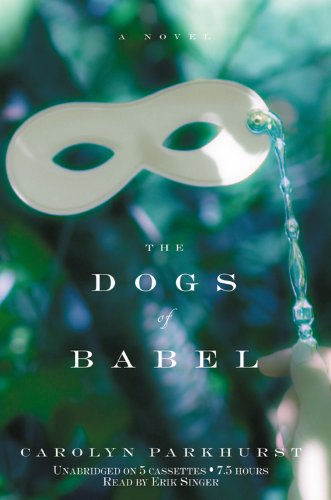 THE DOGS OF BABEL: A Novel

Consumed with grief and obsessed with unlocking the mystery of wife Lexy's fatal fall from a backyard apple tree, 43-year-old linguistics professor Paul Iverson describes himself as "a man who wants to know things no human being could tell him." Unsure whether Lexy's death was an accident or suicide and confronted with some puzzling "clues" she left behind, Paul soon undertakes the bizarre and seemingly impossible task of teaching the tragedy's only witness, his beloved Rhodesian Ridgeback dog, to speak. Seamlessly shifting between characters and accents (including a memorable performance as a Southern fortune teller), stage, television and voice-over actor Singer gives an impeccable, unabridged narration. He deftly handles Parkhurst's frequent use of flashbacks to the couple's early courtship and marriages and has a keen ability to vocally reflect the slightest change in mood. While some listeners may find the animal language acquisition subplot farfetched at points, Parkhurst's attention to human emotion and response bring a poignancy to the unique story line that translates well to audio.