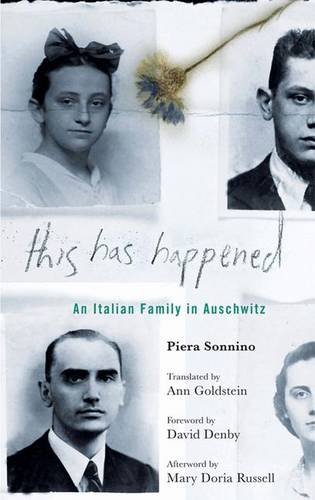 This Has Happened: An Italian Family in Auschwitz

Published after Sonnino's death in 1999, this haunting memoir recounts the story of her Italian Jewish family, including her parents and five siblings, who perished in the Holocaust. In spare, beautifully translated language, Sonnino details her life in Genoa prior to 1938, when the racial laws went into effect. Within a lower-middle-class environment, her parents and siblings were "lambs, good people, ready to suffer many wrongs rather than be stained by a single one, eager to make as little noise as possible and occupy the least space possible on this earth." In 1943, when the Germans arrived in Italy, the Sonninos hid in mountain villages, but were betrayed, arrested and, in 1944, sent to Auschwitz. The author's account of the last night they spent together is eloquent. Her parents and two of her brothers were killed in the gas chambers. Sonnino watched her sister, Bice, succumb to dysentery at the Braunschweig concentration camp after the two were incarcerated at the Bergen-Belsen camp. After the war the author spent five years in rehabilitation centers and sanitariums and returned to Genoa in 1950. She married, raised two children and penned this searing testimony for her family in 1960. B&w photos.