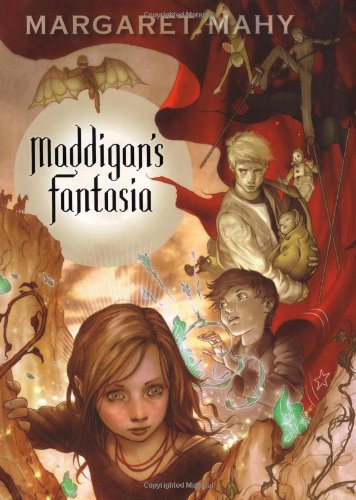 Mahy ( ) serves up a post-apocalyptic fantasy, fashioning a world struggling back from near-oblivion. In a land where even the best-marked roads sometimes disappear without explanation, Maddigan's Fantasia, a traveling circus, is one of the few links connecting isolated towns. Their current tour, however, is unusually urgent because the city of Solis, their home, desperately needs a new solar converter, and only the Fantasia can reach the distant city of Newton, purchase the replacement and return in time. Their quest seems doomed almost from the start, however, when 12-year-old Garland Maddigan, the heroine, loses her father, Ferdy, the Fantasia's ringmaster, to an attack by highwaymen. Then three mysterious children appear, claiming to be from the future. They insist that they've come back to help the Fantasia in its mission, but are ruthlessly pursued by the not-entirely-human agents of the Nennog, the monstrous ruler of Solis in their day. A well-drawn character, Garland resembles other Mahy protagonists—cranky, assertive and filled with self-doubt— and her adventures are invariably exciting. The villains, however, are little more than cartoons, while the novel reads as both picaresque and a tad formulaic, each self-contained chapter featuring a new oddball society, a new threat and a quick resolution. The prose has Mahy's customary polish and fans will enjoy the story, but this falls short of the author's very best. Ages 10-up.