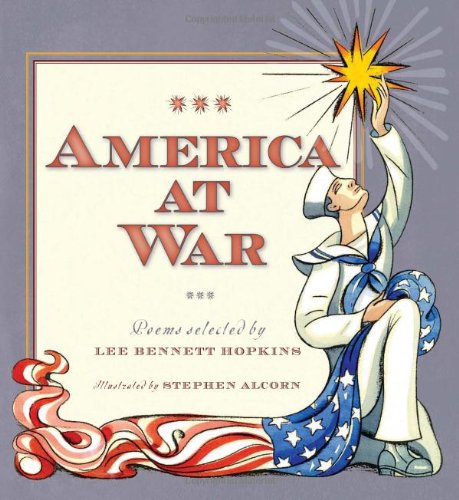 As Hopkins (editor of ) takes pains to emphasize in his introduction, this anthology of 50-some poems is not about war itself but the “poetry of war” and the “emotions of warfare.” Arranged in sections corresponding to eight wars, from the American Revolution to Vietnam, the Persian Gulf War and the current war in Iraq, the entries include classic choices (Stephen Crane, Walt Whitman) and orthodox subjects (a rousing call to “press on” during the Battle of Bunker Hill; the unease of the Civil War drummer boy on the eve of a battle), as well as famous poems used unexpectedly, like Langston Hughes’s “Dreams” paired with a picture of an eagle (possibly “broken-winged” like the bird in the Hughes poem) holding an olive branch, in the Iraq War section. Over half of the poems have been commissioned for this book, however, and most of them sound prosaic next to their more distinguished antecedents (“A young widow trudges home,/ her pockets bulge with wild mushrooms./ Dare she eat them?/ What else can she feed her four hungry children?”). It may be Alcorn’s metaphor-laden watercolors, with their heavy irony and bold graphics, that hold the audience’s interest longest. Ages 8-up.