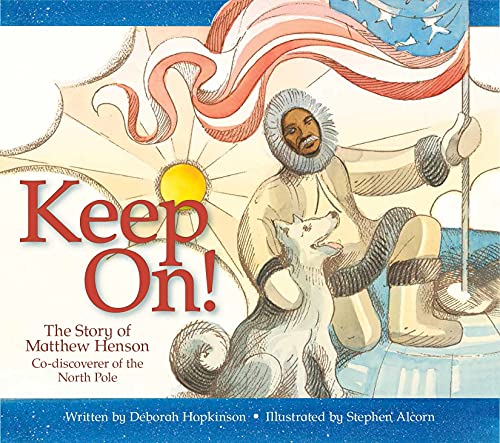 Keep On! The Story of Matthew Henson, Co-discoverer of the North Pole

Hopkinson’s ( ) tribute to Matthew Henson, the African-American explorer credited as being the “co-discoverer” (along with Admiral Robert Peary) of the North Pole in 1909, retells a story gaining traction among picture-book publishers, adding a few welcome embellishments. Henson’s own descriptions of the pristine landscape and the Inuit people, who teach him about the “harsh, cold north,” are peppered throughout Hopkinson’s sturdy prose, while Alcorn’s ( ) characteristically stylized illustrations range from images of classic Americana to organic figures in motion against collage-like backdrops of wild weather. In one detail, sled dogs run skyward, like Santa’s reindeer, past what we can assume to be northern lights; elsewhere, wind gusts against the explorers in curling, curving lines. Though Henson emerges as idealized, Hopkinson’s description of him as “experienced, resourceful, brave” comes across as well deserved. Ages 6–10.