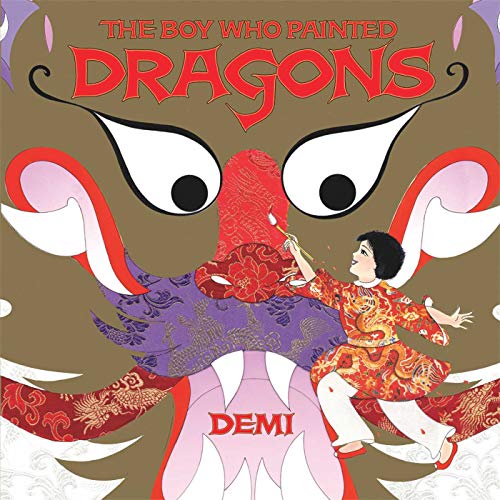 The Boy Who Painted Dragons

The titular dragons in this lavishly produced tale of ancient China are a far cry from the genial Puff-the-Magic-Dragon type. As painted by Ping, the young hero, these are fearsome creatures, with bulging eyes, tentacle-like whiskers, sinuous bodies of gleaming gold, and scary scales of flaming red. But while Ping impresses everyone with his artistry, bravery and industry (he literally covers his house with the beasts), he harbors a secret: the dragons actually represent his fears. Finally outed by the Heavenly Dragon, Ping goes on a dragon-studded quest to discover his courage and learn to bring “all the power and wisdom of the dragons inside.” Demi ( ) may be offering too much of a great thing: her sprawling, gorgeous dragons, set against backgrounds of Chinese brocades and rendered in dazzling metallic inks, constantly threaten to overwhelm the story (and that's leaving aside the two gatefold spreads). But for those who don't mind occasionally hunting for the text when it's obscured by the visual extravagance, there is much lovely writing to savor and wisdom that the audience will recognize. Ages 7-10.