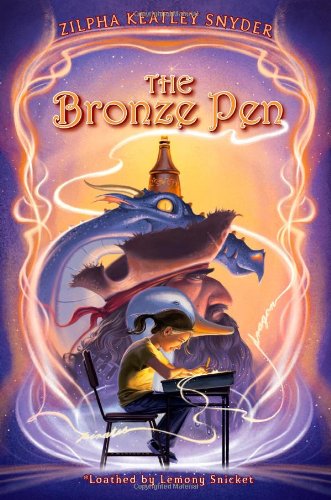 Set (barely noticeably) in 1973, this relatively straightforward fantasy showcases the beloved author's gift for characterization but not, sadly, her finest example of blending magic and realism. With a father confined to his bed with heart disease and an overworked mother, 12-year-old Audrey Abbott takes solace in writing. It's a testament to Snyder's ( ; ) narrative skills that readers will be intrigued rather than doubtful when a large white duck appears, “almost as if [Audrey] had been expecting it,” and guides her to a cave, where she converses with a spooky presence manifested only by its voice. On a subsequent visit, Audrey receives a bronze pen, with instructions to “use it wisely and to good purpose.” The rest of the plot revolves around Audrey's gradual realization that the pen brings what it writes into being. The resolution leaves several loose ends (Just who or what is in the cave? Where does the bronze pen come from?), and the magic only occasionally feels fully integrated with the plight of Audrey's family. Ages 8-12.